Bonquisha is a woman who "matches" with David on Tinder after Max tampers with his phone in the episode "Romeo & Juliet II: Love Resurrected". Unbeknownst to the rest of the camp, the two actually continue dating until Bonquisha breaks it off in the episode "Bonjour Bonquisha".

Bonquisha is a tall and muscular dark-skinned woman with curly hair that is tied up in a ponytail, and yellow eyes that have vertical cat-like pupils. Her wardrobe of choice has hoop earrings, grey jeans, knee-high boots, and a collection of tank tops with often obscene phrases (in "Romeo & Juliet II: Love Resurrected" there is one reading "No Gag Reflex"; and in "Bonjour Bonquisha", there is both "Cock Factory" and "Curling State Champion").

Bonquisha could be considered rather naive due to the fact that she never even suspected that the person she had been speaking to on Tinder was a actually 10-year-old boy named Max; however, upon realizing she had been tricked, Bonquisha's demeanor shifts and she becomes aggressive. She is also rather assertive with David, as she came all the way up to Camp Campbell and thus he "owes" her a date. He seems to be initially intimidated by her, whining "wait, can't we just be friends?" when she lifts him up and carries him off.

She continues to be callous to David in the episode "Bonjour Bonquisha", where she drives up to the camp and breaks up with him with the reasoning that he isn't "man enough" for her, leaving him devastated for the entire week after. By the end of the episode, it's shown that she has quite clearly moved on with a well-dressed and kind man known as Jacob. The extent of how much she actually cared for David is unknown, since their relationship between the two episodes was left entirely unexplored.

To see the full gallery, go to Bonquisha/Gallery. 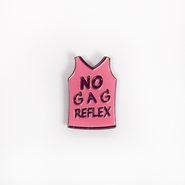