Season 3 is the third season of Camp Camp. It was announced on January 17, 2018[1] to premiere sometime in the Fall of 2018. Premiering alongside new seasons of RVB, RWBY and along with two new Rooster Teeth animated webseries, that being "gen:LOCK" and "Nomad of Nowhere", respectively. But on April 19, 2018, Jordan tweeted[2] that the series would make a comeback on May 25, 2018[3] instead of the presumed return some time later in the year. Similar to season 16 of Red vs. Blue, the episodes of season 3 will only be available to the public on the Rooster Teeth website instead of being uploaded to YouTube a week after the release for FIRST Members.

The world's most dysfunctional-yet-functioning summer camp is back for another season! Cameron Campbell might be in jail, but that won't stop the list of camp-sanctioned activities from getting longer. Pack your bags for murder mysteries, secret agents, lake monsters, and other adventures that are lawsuits just waiting to happen![4] 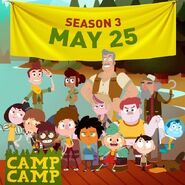 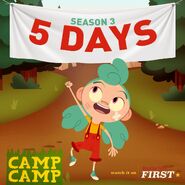 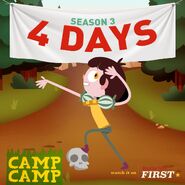 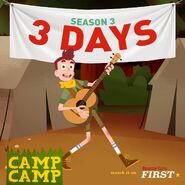 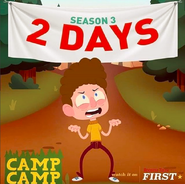 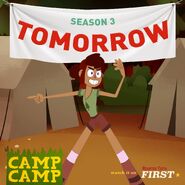 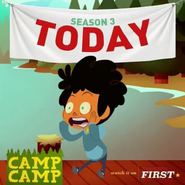