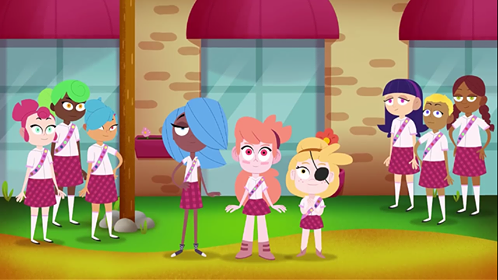 YouTube
Ending theme
"Bake Sale"*
"Cookin' Cookies" is the 11th episode of the second season of Camp Camp and is the 23rd episode overall.

It's the first day of the Flower Scout cookie sales, and troop #789 is planning on selling the most cookies in the country. Their Garden Mother, Miss Priss, refuses to let apparent-garden-mother-rival, Suzie Mendez, make her look bad. Their desire to win is only increased by the fact that this year, the Flower Scout Organization has included a trip to Cabo as the grand prize for the troop that sells the most cookies.

The Wood Scouts approach Erin, Tabii, and Sasha, and offer them the last box of Wood Scouts' popcorn. Edward Pikeman informs them that they have just sold 99% of their popcorn supply, due to moving their sales a month earlier (as suggested by Gwen in "Gwen Gets a Job"). After the boys' departure, the Flower Scouts complain about possibly not being able to sell enough cookies to win the trip to Cabo, to which Miss Priss explains that they must sell their cookies "by any means necessary."

The Flower Scouts try to make sales outside a General Store in Sleepy Peak but are unable to sell a single box. Miss Priss comes out of the store, asking them to keep it down to avoid worsening her "wine headache." Sasha and Erin ask her what they should do. While giving advice, Miss Priss sprinkles the contents of a pill from her purse into her soda. When the girls question her, she tells them that the substance is Desoxyn (Lundbeck's brand of methamphetamine), lying that it is actually the Spanish word for sugar. The girls ask her for it, and she tells them that they can't have it, as she gets it from her "sugar daddy," so it's very expensive. The Flower Scouts interpret her comment as the substance in Miss Priss's possession is actually the newest food craze: Mexican cane sugar.

Miss Priss then hits her high, and goes off to Muffin Tops, leaving the girls to themselves. Hoping that adding the "cane sugar" to their cookies will be just the ticket to win the trip to Mexico, Erin suggests that they steal the Desoxyn from Miss Priss' purse when she isn't looking. They hide under a trench coat to buy merlot from the liquor store, putting their plan into action.

After Miss Priss gets drunk enough to pass out, the girls begin to dig through her purse. After finding the Desoxyn, they head to the kitchen and sprinkle it on some of their cookies. Returning to Sleepy Peak, they begin selling them to passerby. The addictive qualities of the drug cause their cookie sales to boom until they run out of Desoxyn. The Flower Scouts now have to track down Miss Priss's sugar daddy, which they accomplish by stealing her phone.

After meeting "Dirty Kevin" in an alleyway in town, the Flower Scouts tell him they want 'cane sugar,' to which he explains that he doesn't sell to minors. Tabii opens a case full of money, and Kevin agrees to help them out, providing them with more Desoxyn and later bags of crystal methamphetamine. Erin supervises cookies getting loaded into a truck, and Tabii keeps other sellers away from their part of the town.

The popularity of the "cane sugar" cookies eventually catches the attention of the Mexican drug cartel, the head of which is Rafael Guzman. Upon being summoned, the girls reluctantly head to Rafael's mansion in Mexico, which they deride as a "gross" country. In Rafael's office, he is surprised to see that the Flower Scouts are young girls. Rafael asks his bodyguards what the girls are talking about when they say he should be thanking them, and Sasha signals for Erin and Tabii to attack. They throw sharpened cookies (which are reminiscent of shuriken), which hit the bodyguards in the head, killing them. Rafael calls for backup, and the other cartel members burst into the room, only to see the Flower Scouts with guns.

Sasha holds her Glock up to Rafael's head, asking if he really wants to mess with them, or if he'd rather buy cookies. Rafael hurriedly answers that he'll buy all of their cookies, and the cartel members hold up their money, agreeing. When Erin excitedly tells the other girls that they now have enough money to go to Cabo, Rafael confusedly tells them that they're already there, explaining that Cabo San Lucas is a city in Mexico.

Realizing that their vacation is in a country they despise, Sasha, Erin, and Tabii throw out their cookies, declaring the sales a complete waste of time. As they ponder whether or not they have learned anything from their escapades, Max, Nikki, Neil, and the Platypus crash through the roof of the building in an airplane while wearing foreign hats. Sasha declares, "Thank god we live normal lives, unlike those losers."

The transcript for "Cookin' Cookies" may be edited here.

An error occurred parsing line 1 of the transcript.

To see the full gallery, go to Cookin' Cookies/Gallery.