The "Cute Waitress" is a minor character that made her debut in "Bonjour Bonquisha", being the waitress who served Max and the Flower Scout trio during an attempt to try and re-unite David and Bonquisha.

She also has a brief cameo in "Fashion Victims", waiting on a table for Vera and Sasha, but her face is not shown.

She has bright pink hair tied up in a small bun and thin eyebrows, with a small lavender hair clip on her left side-bang. She has round, light blue eyes, and pale skin. Her most noticeable features are her freckles on her cheeks.

Her outfit consists of a dark lilac dress, with dark buttons, and a dark purple apron. She is also wearing dark purple flats. She is mostly seen holding her notes around to take orders, or a tray with glasses on it.

To see the full gallery, go to Cute Waitress/Gallery. 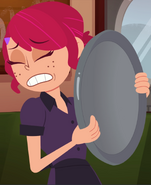