Daniel is a recurring antagonist in Camp Camp. He is a Cult Leader with a profound amount of devotion to his religious ultralord, Xemüg[1] , and all of Daniel's appearances to date have involved him trying to sacrifice people in Xemüg's name. This tends to lead to him trying to infiltrate his way into Camp Campbell one way or another to meet his goal.

Daniel's appearance is identical to David's with the exception of having a much lighter color palette (platinum blond hair and light blue eyes) and more formal clothing. Upon being introduced, Max immediately takes note of Daniel's appearance and makes several comments on his "cult leader getup." His outfit consists of a white polo shirt with two pockets, white pants held up by a white belt and gold buckle, white socks with blue and orange lines, a white and grey watch on his right arm, and lastly, lace-up white shoes with black soles.

Daniel's initial "happy-go-lucky" attitude is remarkably similar to David's, which causes David to invest a lot of trust in him almost immediately. This is later shown to be only a facade concocted to allow him to infiltrate Camp Campbell and subject its campers to "detoxification rituals" in order to help them "reach ascension." His actions at Camp Campbell (and at the unknown compound) show that Daniel is able to manipulate people with ease due to his charm, although his antics are easily discovered under a careful eye, as Max, Nikki, and Neil quickly discern Daniel's true motives.

However, his brashness and overconfidence is ultimately his undoing – going head to head with David, he made a grave mistake by absentmindedly ingesting the poisoned Kool-Aid in his pompous show. When he later returns to the camp and tries to pretend to be David by perfectly mirroring David's appearance and mannerisms, he boasts about this immunity to poison but also reveals he has developed lactose intolerance, which Max exploits to bring him down again.

Daniel is also extremely devoted to Xemüg, using his book on "Xemüg's Guide to Eternal Salvation - Kids Edition" to painstakingly follow its directions in summoning him. He completes each step of the way with a huge smile on his face and doesn't give it much thought when the "summoned" Xemüg tell him to drop everything and to journey to Antarctica and build a temple in his honor, to which Daniel merrily bids everyone farewell with the hope that Xemüg blesses their path. Despite showing suspicion in some of the things the big floating head was saying, he was blindly obedient to its orders and even fell to his knees while bowing. Max successfully banked on this fact, telling Pikeman not to thank god for his defeat, but to "thank the fact that Daniel's an idiot."

He is also shown to be naturally charismatic and able to draw crowds easily, as he stood on a barrel and preached to the citizens of the town in his efforts to earn more recruits. Despite its size and the passion behind his speech, he only successfully recruited 3 people, so it seems as though he can only effectively brainwash smaller groups at a time with his proclamations. He would've already had this skill prior to "Cult Camp" as well, given that he would've needed to draw in enough people to the cult compound whose entire mass murder he is responsible for.

He also took advantage of the Wood Scouts' rivalry with Camp Campbell by leading them in annexing the camp – in fact, the Wood Scouts even state that they are aware that Daniel has tried to kill them in the past. When Daniel's plot escalates to murder, the Wood Scouts sensibly bail out on following him, showing he overestimated how much animosity the Wood Scouts had for the Camp Campbell campers. Still, he presses forward with the human sacrifices, and only abandons his plan when he believe he's actually been visited by Xemüg himself.

Before his arrival at Camp Campbell, Daniel was part of a religious cult compound and caused the deaths of multiple people. Daniel managed to escape the police and eventually came to Camp Campbell after seeing the open camp counselor position in the local newspaper, plotting another mass sacrifice.

Daniel immediately gains David's trust but causes Gwen to bail by using her vacation days, due to how eerily similar the two seemed to look and act.

Daniel is promptly left in charge of the entire camp, although Max, Nikki, and Neil quickly realize that he is a cultist. A purification sauna is built and the campers are brainwashed into setting up an "ascension party", in which they're meant to drink poisoned Kool-Aid and sacrifice themselves to Xemüg[1]. Despite the trio's repeated attempts to get David to put a stop to things, he remains completely oblivious as to what's really going on. After using a bit of reverse psychology on David to make him uncertain about his future at camp, Max then purposely puts himself through the purification sauna and expresses his "affection" for Daniel, acting exactly like the rest of his fellow brainwashed campers. David is finally prompted to take action and tries to fire Daniel, but the duo end up having a musical face-off with "Better Than You" in an attempt to prove their own superiority to each other. At the end of the song Daniel accidentally drinks his own toxic Kool-Aid and is quickly whisked away by an ambulance.

Daniel makes a return in "Arrival of the Torso Takers", spending most of the episode posing as David. Though he had the look down pat, even going so far as to wear colored contact lenses, Max found his mannerisms to be increasingly off-putting. After he, Nikki, and Neil sneak into the bomb shelter to watch a grown-up horror movie, Daniel's solution was to offer counseling to the campers because of how they've been acting out. Throughout the day Max grew increasingly more paranoid that David had been replaced with some kind of torso taking alien, and was frustrated by the fact that no one else seemed to notice. He is ultimately relieved to learn that it was just the "downgrade" in disguise, who reveals he had survived his poisoning by having developed an immunity to it, but has become lactose intolerant as a result, and is upset that he can no longer eat ice cream.

This time he is after Max specifically, intending to have David watch his "favorite camper" slowly lose his mind before being murdered in front of him, and reveals that he had set up a camera to live-stream the event to David. Max subsequently escaped and found David tied to a chair in the bomb shelter. Daniel appears and grabs Max in a last-ditch effort to stab him, but David pounces on him and the two end up in a comical slap-fight. Max picks up a crossbow and threatens to shoot, but since they both look identical and copy each other's dialogue of trying to plead for their lives, he figures he'll just shoot them both. Upon seeing a bunch of expired chocolate milk on a shelf above them and remembering Daniel's allergy, he shoots the cans, and Daniel is ultimately defeated after having accidentally ingested some. Though they lock him in the bomb shelter and call the sheriff to come pick him up, Daniel successfully manages to dig his way out of the ground, and is bitten by the Platypus on his way out.

Daniel's third appearance is in "Camp Loser Says What?", and is by far the most grandiose. As the people of Camp Campbell are swiftly defeated by the Wood Scouts' smoke bombs and paintball guns, it is revealed that their victory was spearheaded by their newfound leadership in Daniel. After being forced to wear Wood Scout uniforms, they are then tasked with building a moat at both camps and going into town to try and recruit more people into their organization. Daniel successfully recruits 3 adult males – which Jermy points out shouldn’t be allowed due to their age – but Pikeman, blinded by the promise of expanding their numbers, allows it anyway.

In being asked what his "angle" is here, Daniel simply says he wants to "uphold and protect the values in this book", showing a yellow Wood Scouts handbook that turns out to have just been a sleeve for another book titled "Xemüg's Guide to Eternal Salvation - Kids Edition". This book has a diagram and step-by-step outline on how to summon Xemüg, which was Daniel's true intention all along. In being summoned, Xemüg is meant to "to consume our world and take us into the next phase of the Great Design", and doing so will require the bodily sacrifices of "everyone", which seems to specify only the people of Camp Campbell. A ceremonial dais had been built at some point, for the purpose of these ritual sacrifices. The Wood Scouts immediately decide they don't want to do this, and although Pikeman is still reluctant – having blindly followed Daniel all day and making excuses for his weird behavior – he ultimately decides to follow his friends' decision, informing Daniel that if he plans to sacrifice the others, he'll have to go through Pikeman first. The heroic act is immediately undone by Daniel agreeing to make a sacrifice of him as well, much to Pikeman's humiliation. A large floating head appears behind the dais, bearing the likeness of Xemüg from the book cover, and orders Daniel not to sacrifice people today; rather, he is to go to Antarctica and build a temple in his honor, with the promise of taking Daniel to his thousand planets if he does. Despite Xemüg supposedly having 10 million planets, Daniel totally falls for it, and immediately abandons everything to follow this new quest. Turns out that Max and David teamed up with the Wood Scouts (off-screen and with the exception of Pikeman) to create and manipulate the head, with Petrol providing the voice. Despite the incredulity of the entire situation, Max suggests that the Wood Scouts return the camp in exchange for having saved Pikeman's (and everyone else's) life, which he agrees to.

For the time being, Daniel is presumably fulfilling his quest in Antarctica, and may potentially return in a future episode.

Front view of a beaming Daniel. 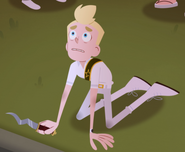 Daniel in 'Camp Loser says What?'

Daniels attempt to kill dolph after drinking his own toxin.