Dirty Kevin is a drug dealer who temporarily worked with Flower Scout Troop #789 to sell meth-induced cookies to the inhabitants of Sleepy Peak.

Kevin is a fairly toned man, who is presumably in his mid to late 20's. He has brown hair, with emerald green eyes and five o'clock shadow. He wears a stained, dark red hoodie, with a noticeable blue patch sewn into it, navy blue jeans with scratches at the knees, and white sneakers, with gray laces, and dirty soles.

Kevin is a known drug dealer, as he shown to be selling from the alley behind the general store in his debut episode, "Cookin' Cookies". His drug of choice at the time was "desoxyn: basically crystal meth." It's unknown what other drugs he deals, if any.

The Flower Scouts seem to have no idea what he actually sells, believing he only supplies Mexican cane sugar to Miss Priss, and so they end up working with him to add the "sugar" to the cookies being sold on their cookie drive. He initially refuses to sell to them, but changes his mind after being shown a briefcase full of cash. With his drugs and the girls' penchant for selling, the entire town basically becomes a crack town. Their entire operation becomes so prolific that it upsets the Mexican drug cartel, which he graciously informs them before the girls head down to Cabo to confront the head of the cartel.

He makes a brief appearance in "City Survival", being part of the infamous "needle alley", where the homeless will let you do anything to them for the right price. Max, Nikki and Neil approached a random businessman to ask about fun things to do in the area, and he says he likes to cut loose there. Dirty Kevin steps out from the alley to ask the man if they're gonna do this illegal drug deal because the homeless people are getting rowdy. He then spots the kids and asks who they are, because he isn't working with kids again. A short Mexican riff then plays, referencing the experience he had with the Flower Scouts in his previous appearance.

In "New Adventure!", Gwen's "feminine haptic devices" go missing, and it turns out Kevin's the one who stole them, with his reasoning revealed to be mainly out of boredom. He's caught after falling into a hole Nikki had made with the intent to catch a sasquatch, and suffered a pretty severe leg break, with the bone sticking right out of his skin. He seems to have been left without assistance at the bottom of the hole at the end of the episode.

In "Camp Loser Says What?" it is shown that he is gullible and a true lowlife, when he joins the Wood Scouts, marketed as Daniel's cult and becomes a guard for Daniel, gives no signs of regret when about to sacrifice the campers, or when Daniel is about to stab Pikeman. He is seen again in "Fashion Victims", paying off Vera to kill the Corporate Exec (who blows off steam by frequenting "needle alley") introduced in "City Survival". It is unknown why Kevin had the man killed, but it most likely had something to do with the activities and recreational drugs of needle alley.

To see the full gallery, go to Dirty Kevin/Gallery. 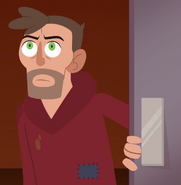 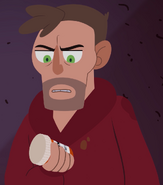 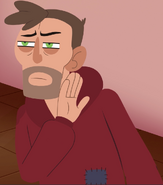