Dolph Houston is an Art Camp camper of Camp Campbell who is designed after the infamous dictator, Adolf Hitler. He speaks with a German accent and is the shortest camper at Camp Campbell. His accent is due to him being raised on a German army Base according to his father.

Dolph bears a striking resemblance to Adolf Hitler, such as the same styling of his dark brown hair. He has pale skin with rosy cheeks and blue eyes. He wears a sand-colored vest with a short sleeved brown shirt, puffy brown pants, and dark brown knee-high boots; a uniform resembling that of the Nazi party under Hitler’s control.

Dolph is generally very friendly towards all the campers, and often tries to look on the bright side of things. Primarily, Dolph is adoring and optimistic, though misunderstood. He is often prone to loud and passionate outbursts to communicate his positive thoughts and opinions. This also translates to sudden eccentric, and violent changes in his behavior, and although this is used in a harmless and comedic way, he often scares people away. This can be seen in "Reigny Day" when he yells at Harrison for his mediocre coloring skills and is willing to "make an example" of Neil when he thinks he's hiding from art camp visibly furious. In "The Order of the Sparrow" when he says "I could be the hero this camp deserves" in a sinister-looking way. He also tries to "help" David eat his sandwich by chewing it up for him, but when David runs away he yells "Resistance is futile turkey man!"

These strangely menacing mood swings are used to compare him more to infamously, passionately violent Hitler. When placed in a position of power in "Reigny Day", he became very determined to enforce order, instantly declaring that the camp was now under his control and that he would "make Camp Campbell great again." More and more references to Adolf Hitler are made during the episode with a piece of black crafting paper landing on his upper lip, creating the look of a toothbrush moustache. His leadership as the temporary camp counselor was enough to merit him a "Camp Counselor of the Year Award" from the Camp Critic Committee. Despite his controlling nature, and resemblance to Hitler, he doesn’t hold any ill will towards anyone else in the series.

In "The Candy Kingpin", Dolph is shown to be quite naive, and that he will desperately cling to whatever connections he can make, regardless of the other person's intentions. He didn't understand that Max only befriended him for the (very obvious) intention of using him for access to his candy supply, and didn't understand Max's efforts to push him away a bit, nor his unkind words towards his overeager attitude for friendship. Dolph even willingly entered a bear cave to retrieve the sweets that were stolen by bears, potentially risking his life in order to keep Max as a friend. Rather than buy into Campbell's suggestion of using the candy as leverage over Max, he instead chooses to decline Max's friendship altogether as he doesn't want to be friends with someone like him, and that if he were in his shoes he would change, and these words make Max seem remorseful. He was also the only camper who doesn't seem to complain about the food served at breakfast that morning, politely appreciating the in-edibility of his breakfast.

According to Cameron Campbell in "Cameron Campbell Can't Handle the Truth Serum", his poor social skills are due to Schizotypal Personality Disorder fully marinated in Asperger's Syndrome. People with StPD usually have few, if any, close relationships (which is true for Dolph), however, this symptom is usually caused by paranoia and extreme social anxiety (which doesn't make sense given Dolph's previous blind trust in Max). In addition, Asperger's was most often characterized by significant difficulties in social interaction along with restricted and repetitive patterns of behavior and interests (which some could say Dolph also exhibits). Dolph seemingly confirms this by sobbing and crying out that it's such a struggle to make a connection, and later says that Campbell opened his eyes toward the path of self improvement. However, it should be noted that StPD, as a personality disorder, is not diagnosed in children, and that Asperger's is a diagnosis that is now outdated. Asperger's being used in relationship to him may have to do with the diagnosis being created by Hans Asperger, who was a Nazi. In "New Adventure!" he did express a desire to break out of the characterization "box" he's been put into by the other campers.

To see the full gallery, go to Dolph/Gallery. 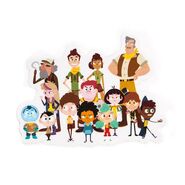