Gwendolyn or "Gwen" as she prefers to be called, is a counselor alongside David at Camp Campbell. Gwen can be described as cynical and is always in a somewhat bad mood. She is also quite the fangirl as she obsesses over Doctor Who, and watches numerous other shows such as Maury, Doctor Phil, The Kardashians, and even watches a parody of Bob Ross called Rob Boss with David. She has been rejected by every other job she's tried applying to, which adds to her unpleasant mood.

Although Pikeman had called her Gwendolyn in "Camporee", this was not confirmed to be her full name until "Party Pooper".

Gwen is roughly the same height as David and has a light brown complexion, along with purple eyes and eye bags. She wears a dark green Camp Campbell shirt, brown shorts, pink socks and brown boots. She has bangs and a short ponytail that are the same shade of dark maroon, but the rest of her hair is a lighter shade of red with a hanging section on either side of her head, which many viewers have incorrectly believed to be a hat. David even mentions an incident in "Time Crapsules" wherein he witnessed a waiter mistaking her odd hairstyle for a hat.

In "The Order of the Sparrow," David gets her to dress up for the occasion. Her Native American wear consists of her usual attire but with red markings on both sides of her cheeks and a single feathered striped headband around her head.

In "Gwen Gets a Job," when Gwen flashbacks to the day when the Wood Scouts raided the camp. She is seen in the Counselors' Cabin in a bathrobe, with her hair tied up into a towel along with a green face mask on.

The outfit that she wears during her interviews consists of a button-up dark blue long sleeved coat, with a white polo with its collar nicely tucked down underneath. She also wears a knee-length skirt and high heels that match with her coat, pearl white earrings and has her hair tied up in a medium-sized bun.

In "A Camp Camp Christmas, or Whatever", Gwen is seen in an unzipped violet jacket, black leggings under her usual shorts, and a fur-lined version of her boots.

Unlike David, Gwen isn't upbeat and happy; rather, she is jaded and sullen. The strange antics of the campers irritate her as much as they irritate Max, who says that their similar attitudes is one of the only things making the camp bearable for him ("Something Fishy"). She can be described as perhaps one of the few sane residents of Camp Campbell - in the 2nd episode of the series "Mascot", she groans with disdain as to how a simple task like finding a mascot was twisted by her co-counselor and campers into something weird and complicated. Also unlike David, she is capable of swearing in front of the campers, as seen in the episode "Escape from Camp Campbell" when she said "Motherfucker" in front of the other campers when Nurf was spinning Space Kid around with the fan. She frequently calls the campers "little shits" and various other unpleasant nicknames. The campers seem to admire her in a twisted kind of way; in "Gwen Gets a Job", Preston finds her to be an authority figure to whom he can make edgy art to rebel against, and Ered then wonders who will bully them into submission.

Despite her outwardly apathetic attitude, Gwen actually cares a great deal about the camp, and takes her job seriously despite it being "not even her last choice" for employment ("Gwen Gets a Job"). In "Party Pooper", she explains to her father Louis that she has generalized anxiety because the world has changed since she was young, and that she's always worried because everything's more difficult nowadays, finally concluding that this is the reason she has to work twice as hard at her job because without her diligence the camp would fall apart. She does display genuine care on some occasions, such as when she stated how awful it was when she assumed that Neil was dead in "Reigny Day", or how she told David to blow off some steam in "Into Town" and even offered to pick up nasal spray for him in "After Hours". She also knew what would cheer him up from his break-up in "Bonjour Bonquisha", and even drove Max to the nearest restaurant to grab some pizza in "Parents' Day" after it was revealed that his parents are neglectful (and possibly abusive) as they never showed up to the event. David frequently acknowledges her hard work and refers to them as Counselor Best Friends for Life, and Space Kid is the only camper who mention this as well by gifting her a snowglobe he made with his helmet in "A Camp Camp Christmas, or Whatever".

Gwen was born to her father Louis and her as-of-yet unnamed mother, though it is stated in "Party Pooper" that she is alive and well. During her youth, she and her dad were very close, and her taught her to play the concertina. During her high school years she used to have a crush on Jake Stonewall who was the captain of the badminton team there as reveled in "Time Crapsules".

After that she became a Graduate at "Sleepy Peak Community College" and got a liberal arts degree. She wasn't able to find work in her field and, after receiving thousands of job rejection letters ("Gwen Gets a Job"), she eventually wound up working at Camp Campbell.

Gwen has a weakness for trashy reality TV shows such as "Teen Prison Mom Wars" ("Camp Cool Kidz"), Dr. Phil, and Maury Povich ("Quartermaster Appreciation Day"). She has an interest in vampire romance ("Journey to Spooky Island"), and a love for Dr. Who to the point where she "wants to have his British babies" ("David Gets Hard"). In "The Lake Lilac Summer Social", Gwen reveals that, in addition to being an avid reader of fanfiction, she is also a writer of fanfiction. She is frequently seen reading magazines with extremely suggestive titles, as well as the Lizards of Love book series, and in even attends a fanfic writer meetup for the series in "After Hours", where her online pen name is revealed to be ChibiKawaiiCat91. Gwen has an apparent interest in various erotica novels, body sculpting magazine, and the suggestive magazines including such titles as "Butt Stuff". This is first shown in the pilot, "Camp Campbell Wants YOU!" and continues to be a running gag for her character. Some other examples seen are "Butts & Bodices" and "Booty Smack". Gwen also has a fetish of sorts for monsters; the episode "Something Fishy" is entirely dedicated to her dating a fishy monster and then immediately breaking up with him when he becomes human. Her love of drama, and perverted habits are seen again in "Panicked Room" when she pushes David out of a escape room monitor room, so she can witness the interactions between old rivals Cameron Campbell and Penelope Priss. When the camp witness the two have sex later on her eyes light up and she blows a "chef's kiss" when David ushers the campers away for emergency swim session.

Later on in "Time Crapsules", Max reads aloud from her childhood diary about her future aspirations (becoming an influential author with a smoking-hot husband and fat stacks of cash), and becomes immediately upset with him, since it's apparent that it isn't anywhere close to where she is now, and all the kids had brutally laughed about it. After dropping herself into a trashcan, she says she has no idea who she is, which contrasts directly with her words in "Party Pooper" when she tells her father that she knows who she is and is proud of herself. That being said, being proud of oneself in the current moment is a much different experience than being upset about childhood wishes for the future that never came to pass. Despite Max's (selfish) efforts to help her feel better, she remains bitter and uncooperative. At the time capsule burial ceremony, she blurts out that the campers should all be terrified about growing up and becoming a failure in life, just like her, which spikes their existing fears even higher. Campbell eventually steps in to explain that adapting to failure is an inevitable part of growing up, but the important thing is to make the most of what you've got. This is why Campbell's words of "straying from the path" affect her, and she eventually understands that the most sensible and realistic approach would be to keep working on her skills (as Max had suggested), rather than freak out and spend all her energy trying to throw herself into a lifestyle and fame that may well never happen.

To see the full gallery, go to Gwen/Gallery. 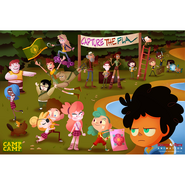