“Gwen Gets a Job”

YouTube
Ending theme
"Underpaid and Overqualified"*
"Gwen Gets a Job" is the 8th episode of the second season of Camp Camp and is the 20th episode overall.

This episode page is missing plot details! Please help us out by adding an episode summary here.

The transcript for "Gwen Gets a Job" may be edited here.

To see the full gallery, go to Gwen Gets a Job/Gallery. 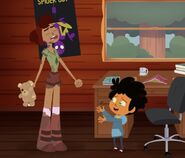 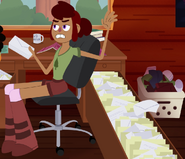