This article is a stub. Please help out the Camp Camp Wikia by expanding it.

Jeremy Nicholas Dooley - also known as "Lil' J" and "JDoolz" - is an American actor, voice actor, show and podcast host, rapper, lyricist, author and Internet & YouTube personality, best known for his work co-hosting Rooster Teeth's gameplay division Achievement Hunter and serving alongside the lyricist team in Camp Camp. Outside of Achievement Hunter, he serves as an occasional actor and content producer in Rooster Teeth Live Action, and lends his voice to various productions, such as Million Dollars, But..., The Eleven Little Roosters, Ten Little Roosters, and many more.

For Camp Camp, he provides the voices of Agent #1 and the enchanted Snowman from "A Camp Camp Christmas, or Whatever", and has created end-credits music for the series, such as "The Camp Camp Rap Rap" and "Adventurer Inside". 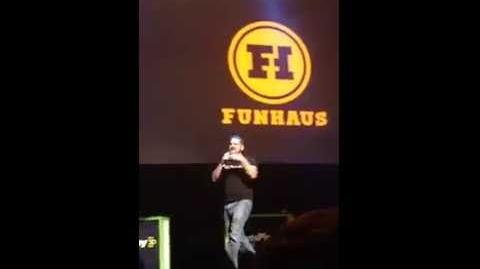