"Night of the Living Ill"

"NIGHT OF THE LIVING ILL" is the 1st bonus episode in the second season of Camp Camp, and is the 25th episode overall in the series.

It was first announced on Jordan Cwierz's Twitter[1]. It premiered on October 6th, 2017, for Rooster Teeth FIRST Members, and October 7th for the general public.

Neil is demonstrating The Law of Conservation of Energy to a bored group of campers. Snapping out of his boredom, Max realizes he hasn't seen either Gwen nor David, just as a scream rings out. The campers rush to the source of the distress and find Preston and Dolph holding back the counselor's cabins doors; the latter of which explains that they are trying to keep the counselors isolated due to their sudden illness.

David manages to pry open the door, attempting to calm them down, only to sneeze on Dolf, infecting him and causing him to sneeze on Nerris, who then sneezes on Harrison. As a panicked Neil realizes the disease is spreading fast, Nurf contains them in the cabin. Gwen asks the non infected campers to get them some medicine, since they don't have any. With a trip to town not being a option, Neil points out there may be medicine at Campbell's Spooky Island lab.

Suddenly, it's revealed that Nurf too has been infected. As he sacrifices himself to stay behind to hold off the zombie-like, sick campers, the remaining campers, Ered, Preston, Neil, Space Kid, Max and Nikki, arrive at the Spooky Island home of Campbell, as Neil sniffles. While hunting for a way to enter the lab, Neil exposes his sickness and causes everyone to split up trying to avoid infection.

One by one, all the campers become infected. Space Kid is revealed to be immune to the infection due to his helmet shielding him from the germs. Max and Space Kid then escape into a garden maze through a window, with Max telling Space Kid about the laundry chute Ered mentioned before. However, before he can enter specifics, he is infected as well.

Now alone, Space Kid returns inside the house to find the lab, determined to find a cure. He manages to come across Jasper, who, due to being a ghost stuck on Spooky Island, knows the manor like the back of his hand and leads Space Kid to a square laundry chute. Space Kid realizes his helmet won't allow him to fit through the chute and he has to take it off, which risks infection. Space Kid lands in the secret lab and rummages for medicine, eventually finding a jar of Penicillin. Just then, a group of infected campers fall down the chute, all wrapped up into a ball and strewn from the chute's opening above. The campers, bound together by the ball, find themselves unable to reach Space Kid (due to the conservation of energy) to infect him. Relieved, Space Kid opens the jar of penicillin and shoves it into Nikki's mouth.

The scene then jump cuts to everyone back in camp, cured thanks to Space Kid's heroics. He is rewarded by not having to clean the bathrooms that have been violated by the sickly campers and staff. However, as they celebrate their good health and honor Space Kid, he sneezes in his helmet to the dismay of the others. With no more medicine available, Max quickly concludes that within his suit, Space Kid cannot infect anyone else. Satisfied with this reasoning, everyone slowly disperses away from the now sick Space Kid, left alone to suffer through his sickness.

The transcript for "NIGHT OF THE LIVING ILL" may be edited here.

To see the full gallery, go to NIGHT OF THE LIVING ILL/Gallery. 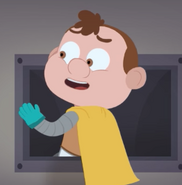