Nicolette, who prefers to go by Nikki, is one of the main characters of Camp Camp. She is an Adventure Camp camper at Camp Campbell but was originally a Flower Scout. It has been hinted that her mother, Candy, may have lied to her about what type of camp she was originally going to attend.

Nikki is among the shortest people at camp. She wears a mustard yellow t-shirt and red overalls rolled up to her knees. She has turquoise hair tied into two pigtails with similarly coloured turquoise shoes with turquoise shoelaces. Her eyes are a bright pink. She has two white band-aids on her left cheek and scratches on her right cheek, hinting she often gets hurt over her love of adventure.

Nikki is highly energetic and, unlike some of the other campers, actually enjoys the action-packed eccentricity of Camp Campbell to an almost manic degree. Nikki has even stated that dreaming of a perfectly normal day at camp is the "the worst nightmare I've ever had", to a point where she is so upset by the very idea that she falls to her knees and sobs uncontrollably ("After Hours"). She had signed up for Adventure Camp and has shown to very much enjoy adventures, and has moreso a love of the ones that are the most chaotic. She is one of the few characters who seems to be completely on board with practically any of the activities presented to the group, and will often participate in them with unbridled excitement. She is not the smartest of people, as she goes along with everything without question, and often makes dumb remarks about things. She is very friendly and outgoing, and seems to get along with most of the campers, even Nurf.

She seems to enjoy dangerous things, describing herself as "an agent of chaos." She seemed to be very attached to a Platypus that she found after learning it was venomous, went along with Max's escape plan for the sole reason of wanting to drive a bus, and even insisted that she wanted a Viking funeral, saying to "Light me up!" When asked what she would do when she left the camp, she stated she wanted to live with the animals, get raised by wolves, maybe become an alpha, and pee on stuff ("Scout's Dishonor").

Nikki is also to shown to be a bit of a glutton as she is easily excited by food, as she scarfs the Quartermaster's mashed potatoes in the theme song, devours an massive amount of food that was prepared for her in "Nikki's Last Day on Earth", and in "The Lake Lilac Summer Social" she eats two of every option at the snack table. She also has a serious affinity for pixi-stix in the episode "The Candy Kingpin", but has to make a conscious effort to stay away from them as her energy levels tend to go off the charts. Despite all of this, she shows no signs of obesity, though because she's often running around and/or crawling on things, she easily burns it all off. In "Nikki's Last Day on Earth", her weird cravings in that episode specifically were due to her period.

She was previously a Flower Scout, but their strict and overly feminine behavior clashed with her love of nature and adventures, and she was kicked out by them. Nikki refers to the experience as traumatic for her.

To see the full gallery, go to Nikki/Gallery. 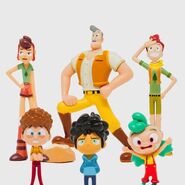