Nose
Can Can
Ears
Mandys Pink

Nurf 2 is a copy made by Nurf from Cameron Campbell's 3D printer in "Attack of the Nurfs" as a way to understand himself. After making more copies to start a bullypocalpyse, he and the rest of the army are sucked into another dimension. Nurf 2 is the only one to survive the event, but is left without any legs.

Nurf 2's appearance is identical to that of the original Nurf, except for the number 2 on his shirt seemingly made out of 5 pieces of packing tape.

Nurf 2 seems to be just as rowdy and mean as the original Nurf is which is shown when they both punch Nerris after she accuses them of "necromancy". He holds the original Nurf in high regard, and because they get along so well the two of them spend an entire day in each other's company. Finally having a friend to vent to allowed Nurf to discover that friendship almost entirely erased his urge to bully. He is sympathetic and understanding of this discovery of self-reflection. Despite this, Nurf's friendship is not enough for Nurf 2, and he creates another copy (Nurf 3) in secret. Although Nurf is initially concerned, he understands Nurf 2's justification of wanting another friend, and does not realize how conniving this action really is.

Nurf 2 (as well as Nurf 3) take things too far upon hearing Nurf wishing "it could be us Nurfs out here", by creating a small army's worth of fake copies, and further coerce Nurf into letting them do so by reminding him they're only trying to make his wish come true. Nurf 2 holds an assembly for the copies and declares that he wants to create an atmosphere at camp that is "so miserable, so not conducive to fun or friendship for anyone but ourselves."

This leads Nurf to seek out advice from the other campers on how to take them down and prevent a bullypocalypse. It is suggested that Nurf insult them with the same topics that he himself is sensitive about, and it works. Nurf 2 and the other copies end up having the same insecurities, such as body image issues and insecurity/abandonment issues involving his father. Nurf 2 is quite hurt by this, and is even more hurt when, in trying to appeal to his "brother", he is told "you're no brother, you're just a copy".

After the rest of the army is sucked up into a vortex, Nurf 2 is left sitting on the ground, having lost his hips and legs entirely. Nurf goes on a heartfelt speech about understanding how he can improve himself, only to find that the entire camp deserted him entirely. The previously-sympathetic Nurf 2, having lost respect for his maker, angrily retorts "oh cry me a fucking river."

To see the full gallery, go to Nurf 2/Gallery. 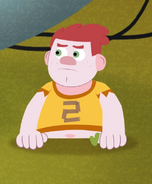