"Parents' Day" is the 12th episode and the season finale of the second season of Camp Camp. It is the 24th episode overall.

It's a big day at Camp Campbell (and not Christmas, as Nikki thinks). David has invited the campers' parents over to show off what the kids have learned and host activities involving the parents, though Max is confident that his parents won't show up. Cameron Campbell arrives, back from Russia, and is enraged and frightened to learn that the parents will find out what kind of camp he is running. Just as he demands that David cancel it, the parents arrive and begin mingling in the mess hall. While Nikki's mom shamelessly flirts with Neil's dad, Campbell is confronted by FBI agents Miller and Miller, Ered's "cool gay dads", regarding his obtaining of Russian intelligence. The other parents begin questioning the absence of the camps they signed their kids up for, and Campbell decides to take them on a tour, under threat of the Millers taking him in. Max is content to sit it out, but Campbell forces him into a family setting with David and Gwen until his real parents arrive (to David's delight).

Nerris shows her parents to her LARPing camp castle, which her father seems to enjoy, but her mother finds herself concerned for her child's safety. Campbell strides on past, before greeting Dolph's father, an American army lieutenant, who is somehow oblivious to Dolph's similarities to Hitler, and against his love of art. David and Gwen learn that Harrison's magic is more than just illusion and sleight of hand, Max sympathizes briefly with Space Kid, whose parents couldn't make it, but swiftly goes back to picking on him when it turns out his uncle is coming instead. His uncle turns out to be famed astronaut Buzz Aldrin, who isn't happy about the fake moon landing video the camp sent him, since the footage was of HIM walking on the moon, and he swiftly decks David. Seeing this, Campbell calls for dinner and tries to appease the Millers, but they're concerned about the platypus making a mess on their table, despite Ered liking it. Preston tries talking to his practically deaf grandma while Max throws mashed potatoes at her. Neil is horribly embarrassed at his dad's attempts to understand his interests and is doubly embarrassed when he thinks Neil is romantically involved with Nikki, and Nikki's mom doesn't help when she picks up where she left off. Nikki thinks their parents might get together, but Neil is determined to stop it before it happens and suggests that his dad bring out his teaching assistant, Sockrates, a sock puppet version of Socrates. It doesn't work. As Max insists that his parents aren't coming, there's a loud hammering on the mess hall doors. It turns out to be Mr. and Mrs. Fartz, looking for Jermy, which forces Gwen to admit that they lost him to the Wood Scouts.

The final activity begins with the campers showing off what they've learned to their parents. While Harrison does his magic show, Campbell furiously appeals to David to make sure everyone does their job, the idea of Super Guantanamo looming in his mind, but Max is confident the other campers will blow it before he gets the chance. To his dismay, Nurf makes an impassioned speech to his mother about words cutting more than knives, and Nerris performs a heartwarming fantasy play with her parents. As Neil and Nikki wonder where their parents have got to, the curtain goes up on Preston's Red Riding Hood play. Just then, the cottage prop collapses to reveal Nikki and Neil's parents having sex. Campbell cuts Preston's play short, and Nikki's mom suggests that Carl get himself tested for Quartersister. Campbell demands that David, Gwen, and Max start their play immediately while preparing to make a getaway, and Gwen arrives with Max's paperwork. Max refuses to perform, and David explodes at him until he reads Max's enrollment form and learns that his parents didn't care enough to sign him up for any activity. David is torn between obeying Campbell and attending to a tearful Max and ultimately chooses to see to Max. As the curtain goes up, Campbell laments on losing another kid, to everyone's shock.

Meanwhile, Gwen and David have taken Max out for pizza, where David apologizes to Max for trying to force him to be happy and hopes he can find true happiness at camp despite his parents' neglect, even if it isn't today. Once they've finished eating, Max hugs David for a split second before affirming that it didn't happen and threatening to kill David if word of it gets back to camp. Gwen wonders if everything's going alright back at camp, but David's confident that it's nothing Campbell can't handle. The screaming Campbell is then seen being hauled into an FBI van by Ered's dads, destined for Super Guantanamo. He swears revenge against David as he's driven away, and Nikki sums up the whole affair with a simple "So, yeah, that's our camp!".

The transcript for "Parents' Day" may be edited here.

To see the full gallery, go to Parents' Day/Gallery. 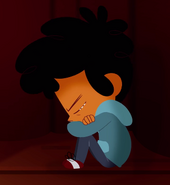