Penelope Priss is the Garden Mother (i.e. leader) of Flower Scout Troop #789. She made her debut in the episode "Cookin' Cookies".

Miss Priss has fair skin, wide hips, and long legs. She has big poofy hair that ends in a curl at the top of her head that's supported by a headband. She wears a heavy layer of makeup and nail polish over her long nails. She wears the traditional Flower Scout uniform along with a sash with her badges on it along with a plaid skirt and magenta heels and black earrings.

Miss Priss is shown to be arrogant, selfish and very preoccupied with her own appearance. It seems her only wish is to succeed by showing up the other Garden Mothers and would "rather die" before looking bad in front of them.

She gives her campers the bare minimum of attention and would rather be out smoking or drinking in a nearby bar. She is also severely alcoholic, as mentioned in both "Cookin' Cookies" and "Panicked Room", though according to her she can "stop any time I want to." She also partakes in the recreational drug known as Desoxyn (which is "basically meth", according to the label) according to the episode "Cookin' Cookies". In the same episode, she drunkenly stumbles off while loudly declaring she's going over to Muffin Tops, suggesting she frequents strip clubs often.

In the episode "Fashion Victims", she is suckered into a crazy fad diet by one of her campers (who happens to be a social media influencer) in order to help lose weight. Despite said diet being thoroughly restrictive, such as being allowed to sniff an empty cookie box as her "lunch", she religiously follows the diet until her hunger gets the better of her, and she ravenously consumes everything in sight.

She is also fairly vain, as she was extremely offended when Campbell suggested she "suck it in" to escape through a ventilation shaft, thus implying she's overweight, and did not like it when he told her she had a "permanently surprised face", implying she's had Botox injections.

The episode "Panicked Room" reveals that she is fairly intelligent as well. She mentions having a bachelor's degree, but is interrupted by Cameron Campbell before revealing its subject. She also understands the alphanumeric puzzle that he did not (each number corresponding with the first letter of the photographed animals' names), but didn't enter the incorrect code as the animals needed to be identified by their scientific classification rather than layman's terms. In the end, she was the one to realize the final solution to unlocking the escape room door. She also appears to be fond of puns.

To see the full gallery, go to Penelope Priss/Gallery. 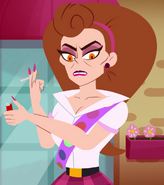