Neil Armstrong Jr., or most commonly known as "Space Kid", is a Space Camp camper at Camp Campbell and is often seen obsessing over space and being able to go to space at one point. He is later revealed to be the great-grandson of the actual Neil Armstrong and the great grand nephew of Armstrong's Apollo 11 colleague, Buzz Aldrin.

Space Kid is a relatively short boy. He wears an 'astronaut helmet,' which rather resembles an upside-down fishbowl, over his head at all times. His hair also puffs up in the front, albeit being smoothed down (or even shaved off) on the sides. He wears a yellow cape, which is tied around his neck. He also has a brown vest on, which appears to have a silver patch on the right side, and be duct-taped on the left, giving it a rather makeshift appearance. He wears gray pants with his underwear on the outside. Finally, he wears blue gloves and matching boots.

When wearing his helmet, he appears to have light-blue skin, indigo hair, and blue eyes. When his helmet is off, however, he is shown to have pale skin, light brown eyes, and dark brown hair. When his helmet is on, it causes vocal distortion, but when it is off his voice seems to be less shrill.

Space Kid is very upbeat and optimistic, managing to maintain a positive attitude even in the oddest of times.

He signed up for Space Camp at Camp Campbell, and is, obviously, shown to have a deep fascination with space. In "Escape from Camp Campbell", he is shown to have tied himself to one of the Mess Hall's ceiling fans, and gotten Nurf to turn the fan on for him. After having it turned off, and then falling from it, he yells, "I will achieve space flight!" Later on, under extreme fatigue and nausea in the episode "Space Camp Was a Hoax", he sincerely believes he's achieved it.

In "Space Camp Was a Hoax" Space Kid appears to relate to anti-communism statements, in particular the rhetoric that the U.S. government used to promote the Apollo program, shouting "we have to beat the Soviets!" when asked about his race.

In "Jermy Fartz", when Max, Neil, and Nikki are arguing over who the best camper is, he offers the idea that it could be him. At the looks of ridicule he receives, he simply laughs and says, "fair enough." Later on in "NIGHT OF THE LIVING ILL", he simply replies "fair enough" when Max opts to abandon him for being very expendable, showing that Space Kid has seemingly accepted his very low place in the camp's social hierarchy. In "The Quarter-Moon Convergence" Space Kid tries to take the helm in Astronomy Camp, and when Neil condescendingly says it's cute he think the others would listen, his reply is "I know, right?", thus further cementing his low social standing.

He is also incredibly oblivious. "Quartermaster Appreciation Day," he appears to be unfazed after opening a demonic box. When it is opened, his pupils dilate and go momentarily red, and he begins to spout gibberish. After closing it, he simply comments, "huh, that was weird" and then swiftly moves on. However, in other situations, he appears to be unaware of seemingly obvious social cues, such as in "Cult Camp", when Gwen returns with her candidate for a new counselor, he was the only camper not to be worried and instead warmly greet her, seemingly missing the signs that she was a cultist.

Despite his obliviousness and optimism, even he seems disturbed by Quartermaster and Quartersister's PDA, evidenced by both his facial expressions and actions when they announce that they're going to get married.

In the season 2 finale, "Parents' Day" it is revealed that he has a good and stable relationship with his honorary uncle, Buzz Aldrin. His parents seem too busy that they can't come to 'parents day' but his uncle came and stated that his uncle Buzz was the greatest in the galaxy.

To see the full gallery, go to Space Kid/Gallery. 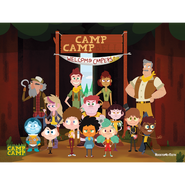 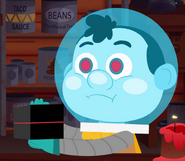